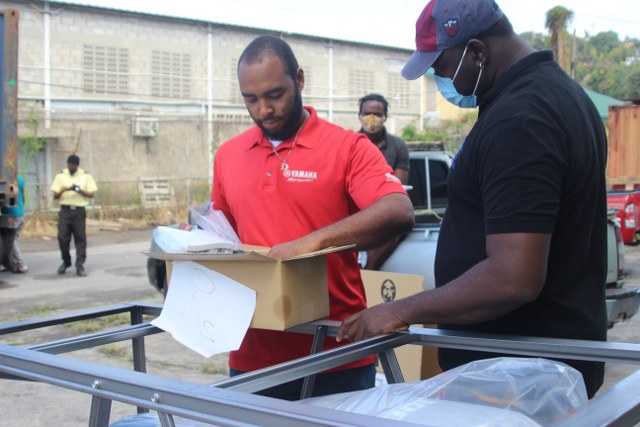 The first batch of fifty – two (52) engines will be distributed to fishers’ folks approved under the project for the restoration of their livelihoods. 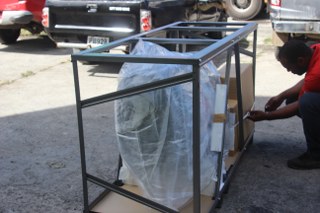 On Wednesday December 23, 2020, the project, handed over four (4) 50 horsepower and one (1) 100 horsepower engines to fishers from the fish landing sites of Roseau, Stowe, Scotts Head, Colihaut and San Sauver. For the remaining beneficiaries the project has put in place a pick-up schedule. Fisherfolks will be called in by groups of ten (10) to collect their engines. Fisherfolks are expected to provide a vehicle when collecting engines.

The outboard motor engines were procured by Auto Trade Ltd. Presently, Auto Trade is undertaking training sessions for the beneficiaries in outboard motor maintenance and warranty. The company will also, undertake, the testing of the engines and provide supervision to the fishers when mounting the engines.

Fisherfolks that are approved for boats under the project will receive a resilient seaworthy fishing boat ranging in length from 21 to 25 foot.

At the close of the Fisheries Expressions of Interest (EOI) /Applications, the project received 212 applications for engines ,76 for boats and 5 for canoes.

Following the devastations of Hurricane Maria in September 2017, the Government of Dominica with the financial support of the World Bank US$25.0 million, (EC$67 million) started the implementation of the “Emergency Agricultural Livelihoods and Climate Resilience Project (EALCRP), a five-year period intervention.

The project has four components. Component A is the Restoration of the Productive Base for the Recovery of Agricultural Livelihoods including Cropping, Livestock and Fisheries.

Under this main component is a sub- component A2 which includes the Restoration of the Fisheries Systems (USD 1.8 million) which targets restoration of livelihood of fisher folks and repairing/reconstruction of boat/boat building facilities.

View more photos in the Gallery